Epic to be Part of a TPT Special 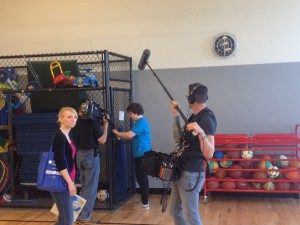 Epic Enterprise will be on television! Epic Enterprise Inc. was asked to be a part of a documentary being filmed by Steve Spencer, Senior Producer with Twin Cities Public television. The documentary will focus on the 25th anniversary signing of the Americans With Disabilities Act. We were pleased to escort the film crew to three work sites where people we support are employed. Thanks to Dylan, Dot, Kelly and Erin for their willingness to be filmed. We also appreciate the Northfield YMCA, Peterson Farms and Farmer Seed and Nursery for their involvement. It was a wonderful day of filming with great participation from everyone involved. We expect the first airing to be in late July on TPT.  Watch our website for more details as they become known.

Epic is investing in individuals as they pursue opportunities to participate in their community.   We feel the work highlighted in this documentary will be a great example of how our services and supports have helped people with disabilities obtain employment.  While the ADA has opened up opportunities over the years, we look forward to a future with expanded employment options.